Well....here I am again, blogging about something I wish I didn't have to. This past Saturday night January 24th, my sweet ole Bird (my grandfather, I will get to how he got the name Bird in a minute) went to be with the Lord. What a sweet reunion he is having. Not only getting to come face to face with Jesus, but also being reunited with his wife and sweet little girl Lou Anne whom he lost when she was 14.

As I explained to my own children that The Bird had gotten to go to heaven they were SO excited for him!! They were excited for him to get to go to heaven and see Jesus, for him to get to see his "husband" as CT said, otherwise know as Memaw Brown. They were excited that he got to get a new body and run fast! As I thought about how excited they were for him, I was excited for him too. That's how we should look at it. Of course I am sad, because it's hard to be the one left here, and to lose someone you love, but one day soon we will all be together again.


Let's see....where do I even begin. "The Bird" all started around 10 years ago. The summer of 1998. I had just graduated from college, my best friends dad had just had a massive stroke, and my grandmother was dying. It was the summer from you know where. Anyway, I had the job of driving to Tulsa to pick up my grandmother's sister and her husband to be here for the last few days before my Memaw Brown passed away. My grandfather was sending me in his car. He was so afraid that I was going to lock the keys in the car, so he made me wear the spare key on a rope around my neck. Granted I had just graduated from college. :) So I did as I was told, but not without a "How are you going to know if I really wear that key or not?" He replied, "Oh a little bird will tell me." So as I became the little bird, he became the Big Bird or just Bird. :)

As sad as I was to see my grandmother pass away, it was a good 10 years that I had with just the Bird. I didn't know him very well while she was alive. He was such a private and quiet person that she did all the talking for him. ha! Also she just liked to talk. Once she passed away, he didn't have a choice but to talk.

There are many stories to think of and tell, but I am going to write down some of my favorites. I will probably add to this as I think of them. :)

As far back as I can remember, we would meet them every Sunday after church for Sunday lunch. Although my grandparents didn't attend church, they were always dressed to the tee. We only ate at two places Furr's or Luby's. I used to hate it when I was little, but grew to enjoy the time we had with them.

After my grandmother passed away, we still had our weekly Sunday lunch with him at Luby's. There was this lady (a little off her rocker) that worked there, that "knew" him from him eating there so much. She would pay attention to him, and try to talk to him. He would get so frustrated with her, and would say to us "Here comes the ole battle axe." Of course he was nice to her face.

He was such a mess and funny. When he would pay the bill at a restaurant, he would kiss each bill goodbye as he layed them down on the table. My grandmother used to get so irritated with him, but I would crack up.

When you would call his shop and get his answering machine, it would say: "Ray's ordamatic (automatic) answering service. Leave your name and number, and Ray will personally return your call."

As a little girl he had this HUGE plastic light up Santa that he would put in the window of his shop. I always thought that it was so cool. I saw it the other day at his house, and it made me smile.

The Bird grew up in Coal Hill, AR which was in Johnson County. So anytime I was headed that way he told me to make sure I rolled down my window and to take a big whiff of that fresh Johnson County air. He said it didn't get any better than that.

One of the biggest "debates" we would get in would be over his love for his main man "Willy" aka Bill Clinton. I don't know that he really liked him all that much, but he knew it would rial me up when he talked about him. So when these elections rolled around he started talking about his main woman Hillary, b/c she would bring his main man "Willy" back to the White House.

A couple of weeks ago, I came to visit him. The kids and I went over and hung out with him. He was still answering his work phone, even though he was no longer working or capable of working. Someone had called to see if he had a certain part. Of course he didn't tell them he was no longer working, but told them he didn't have that part, and probably wouldn't for a long time. Not to long after that he had my Mom turn his phones off. He told her he sure was glad she finally did that, because he was tired of coming up with excuses of why he couldn't make a call or didn't have a part.

As I think back on the Bird, and the 82 years that went by all too fast, a few words come to mind. Tall, dark, and handsome, gentle giant, not so patient :), hard worker, giving, loving, fun, cut-up, very private, and an all around great guy. I am very blessed to have called him grandfather. Love you Bird! 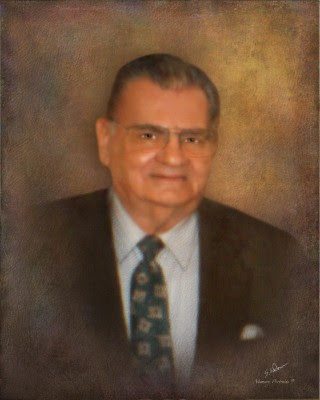 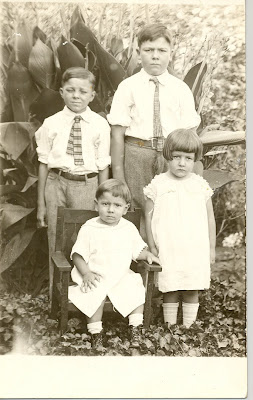 The Bird is the little boy on the bottom left. Isn't he precious? 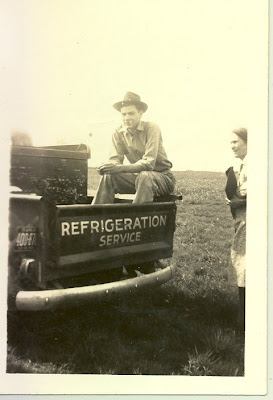 The Bird starting his career. 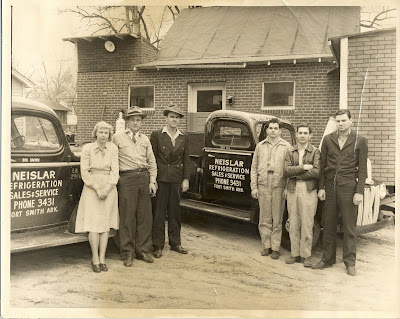 The Bird is on the far right. 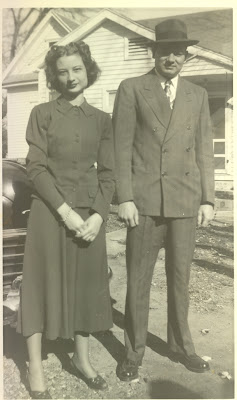 Memaw Brown and The Bird 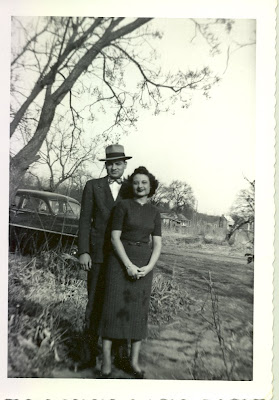 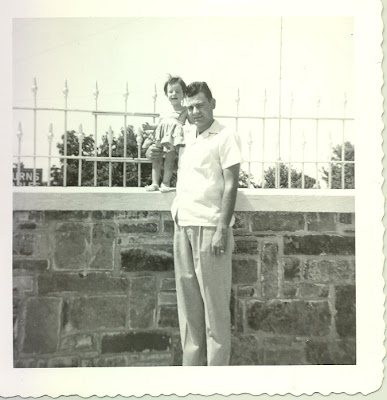 The Bird with my Mom. 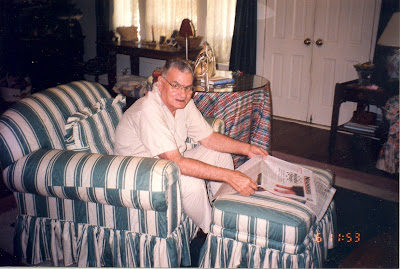 The Bird as I remember him. Keeping up with the latest news, and wearing those coveralls. :) 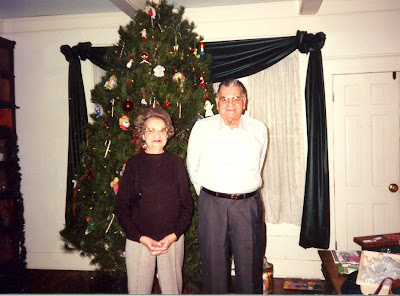 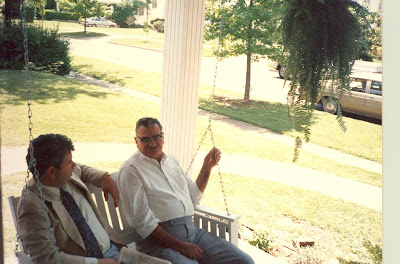 Chillin' on the swing. This is my dad with The Bird. I miss that ole swing, and that ole Bird. 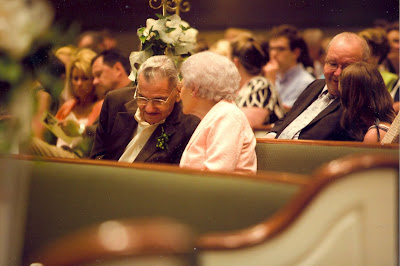 The Bird and his friend Nancy at my brother's wedding. She was my grandmother's best friend. After my grandmother died they did a lot together.

The Bird in his famous truck! He was an appliance repairman. He had advertisements ALL over this truck. Once he got rid of this truck he bought a car. We tried to talk him out of it, BUT he decaled the back bumper of his car with Ray's Appliance and Services. :) He was such a mess. 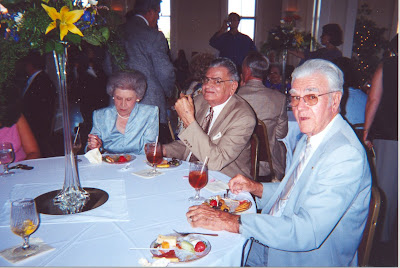 Nancy, The Bird, and his brother Bob at my wedding reception. 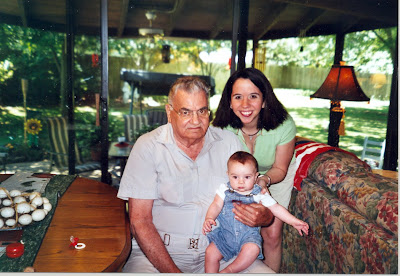 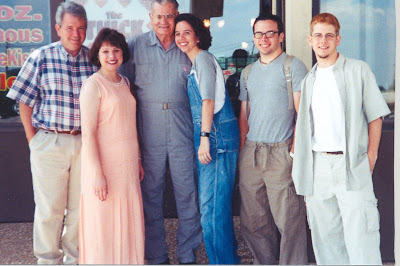 My family eating out with the Bird. We did this OFTEN. In fact that was what we probably did most with them. Eat out! My grandparents are responsible for my aquired taste for cafeteria food. I'm a sucker for any Furr's or Luby's. So you can imagine my excitement when they came out with Furr's Buffet. :) 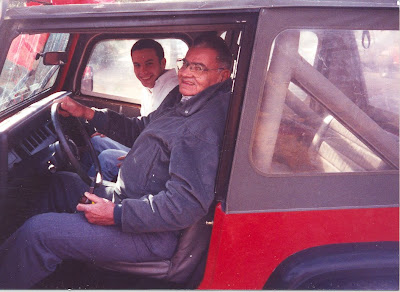 My brother Chris and The Bird. This was when Chris got his jeep for Christmas. The Bird thought he would take it for a spin! 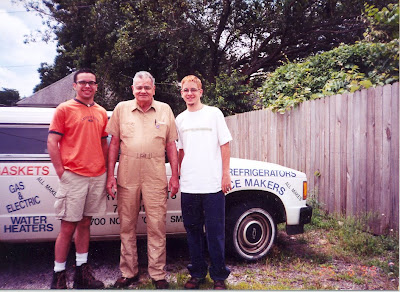 My brothers Chris and Chad with the Bird in front of the infamous truck! :)
Posted by Aimee at 9:06 PM

Aimee, so sorry to hear about the bird. You did a great job of sharing your heart about him. Your kids have it right, how exciting to be in heaven with our Savior.

I must also share that I had the wonderful opportunity to eat one of those sunday after church lunches with them at Luby's. I'm sure it was sometime during college days and I vividly remember laughing so hard because your grandparents were so funny.

Also, I must give the bird credit for a family tradition that we have...every time we drive to Clarks Vegas when we hit the Johnson County line we roll down the window to get some of the best air! those coal hill people are hard to beat! my granny is still there.

So sorry to hear about the Bird flying to Heaven, but I share the joy that the kids have in that he is there!! Kylie mentioned the other day how she wanted to go to Heaven, but that she only wanted to be up there with us!

Aimee, I'm so sorry to hear about your Bird. This is one of those stories your children will cherish as much as you do. Hope the Bird is rejoicing his pants off in Heaven!

I'm sorry to hear about your loss but thanks for sharing those stories. I never knew much about that side of your family growing up... except that I was jealous of your grandmother always taking you shopping! lol